For more information, please leave your email address and we will be in touch with you shortly. 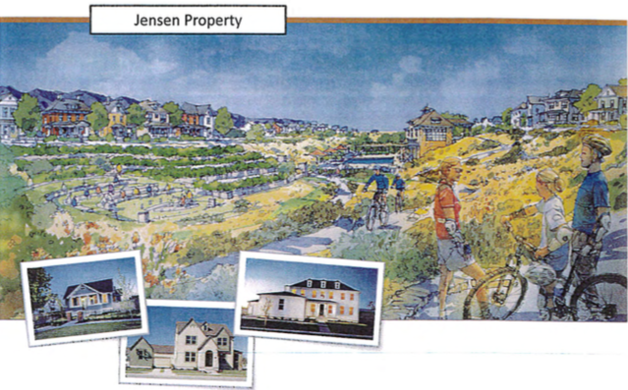 Renderings of what an 889-unit housing development may look like on the east side of Mountain View Corridor once it reaches completion. The West Jordan City Council approved a zoning and land use map amendment for this project on Jan. 25. (JF Capital)

A 205-acre housing development of nearly 900 units is heading to West Jordan. On Jan. 25, the city council approved a zoning and land use map amendment for the proposed development.

The land, located at 6150 West 7800 South and east of the Mountain View Corridor, was used for farming by a family with the surname Jensen for five generations. Now vacant, the owner decided to sell the property.

The proposed master-planned community will include approximately 569 single-family homes, 116 townhomes, 204 senior housing units, 11 acres of commercial land and about 34 acres of open space. The largest single-family homes will be on quarter-acre lots. Amenities include a church, a clubhouse, a pool, an amphitheater, a community garden, three small parks and a trail system.

Mayor Kim Rolfe said JF Capital and CW Land Co., the property’s developers, were the first developers in his 13 years of West Jordan government experience to collaborate with city officials extensively on community design. They sought input from city leaders for two days, he said.

“Our staff worked hard and tirelessly with their engineers, and, to me, it is refreshing to see that kind of partnership,” Rolfe said.

The collaboration with West Jordan leaders occurred in August 2015, but the developers were unable to move forward on the project until the land was cleared for development by the Utah Department of Transportation and West Jordan changed its cap and grade ordinance to allow higher density in planned communities of more than 75 acres in exchange for design and amenity upgrades.

“It’s been a long time coming, and we are excited,” said Bryan Bayles, who was the spokesperson for the developer at the Jan. 25 meeting. “Our goal for the design of the community was to create a new neighborhood that incorporates the agricultural heritage and natural beauty of the site with high-quality development.”

A ravine runs through the southeast portion of the site and was the original site of the Jensen family homestead, so the designers decided to preserve the green spine and use it for trails and parks space.

“(Mountain View Corridor) is our one and only freeway that we will have in this city, and commercial nodes around freeways are normally what you have,” Councilman Zach Jacob said. “I don’t think that the Smith’s Marketplace there will satisfy all of our future needs forever and ever.”

Jacob said he was “85 percent” in favor of the land-use amendment and rezone that would allow the developer to move forward but would wait to vote affirmatively until changes were made to allow more than 11 acres of commercial space in the 205 acres. Councilman Chad Nichols voiced a similar view.

Councilman Chris McConnehey said he’d want more commercial on the property had UDOT created frontage roads along the Mountain View Corridor but said without the frontage roads commercial wouldn’t be the “highest and best” use.

“Even though you have an on-ramp and an off-ramp at 7800, it’s still very restricting,” McConnehey said. “Then you look at the challenges of some of the typography with that ravine right there, and I’m not sure how viable commercial would be.”

McConnehey made a motion to approve the land-use map and rezone of the Jensen property, and the vote passed 4–3, with council members Nichols, Jacob and Alan Anderson dissenting.

Before the project can start, the city council still must approve the project’s development plan. The project build-out is expected to last seven to 10 years.